Cornus -- a Tree for Your Garden

The common name for cornus is dogwood. These are small trees growing to 20 feet or so and are valuable additions to any small garden or as an understory layer in a larger one. 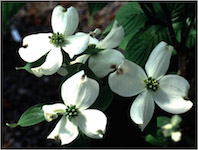 Cornus florida is the wonderful native species that blooms for almost all of May with a cluster of tiny flowers that turn into beautiful berries later in the season (read Doug Tallamy on how much robins and other birds thrive on them). The flowers are surrounded by four large bracts that are big waxy petals that are typically misnamed the tree’s flowers. These bracts decorate the tree for almost the entire month of May. Later, there are the colorful red fruits and beautiful orange and red/maroon fall foliage. We have the most disease resistant variety available at this year’s sale: Appalachian Spring. 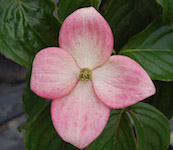 After the native dogwoods finish their display, the cornus kousa start blooming and their bloom usually lasts through June. We have several new and different varieties at this year’s sale: Summer Gold has white bracts and striking yellow variegated foliage. Then we have two white variegated foliage dogwoods that we’ve carried before but that continue to be among our favorites: Miss Santomi with blush pink flower bracts and Wolf Eyes, which is smaller and slower growing than most. It has brilliant variegation that shines in a shady corner. I’ve also seen it used effectively in large urns at the Mansion in May in Far Hills a few years ago. The last kousa is 'Kristen Lipka', which is an amazing weeping form. A final great thing about the kousa dogwoods is their big raspberry-like fruit that, although seedy, tastes like banana. It’s a special treat for my dogs and me, but we do leave most for the birds. 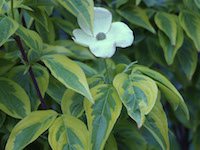 Then, overlapping the bloom of the floridas and kousas are the Rutgers hybrids, known for their disease resistance and large blooms. We have several new ones: Rosy Teacups, which has pink blooms as adorable as it’s name; Variegated Stellar Pink, which has light pink bracts and white variegated foliage; Celestial Shadows, developed by the well known dogwood breeder Don Shadow, who gave it the botanical hybrid name of ‘Michael Steinhardt’. Mr. Steinhardt is a benefactor of the Brooklyn Botanical Garden and has the most amazing, not-to-be missed garden in Mt. Kisco that is part of the Garden Conservancy Open Days program. Plan to spend the whole day when you go.

Donate to The Friends